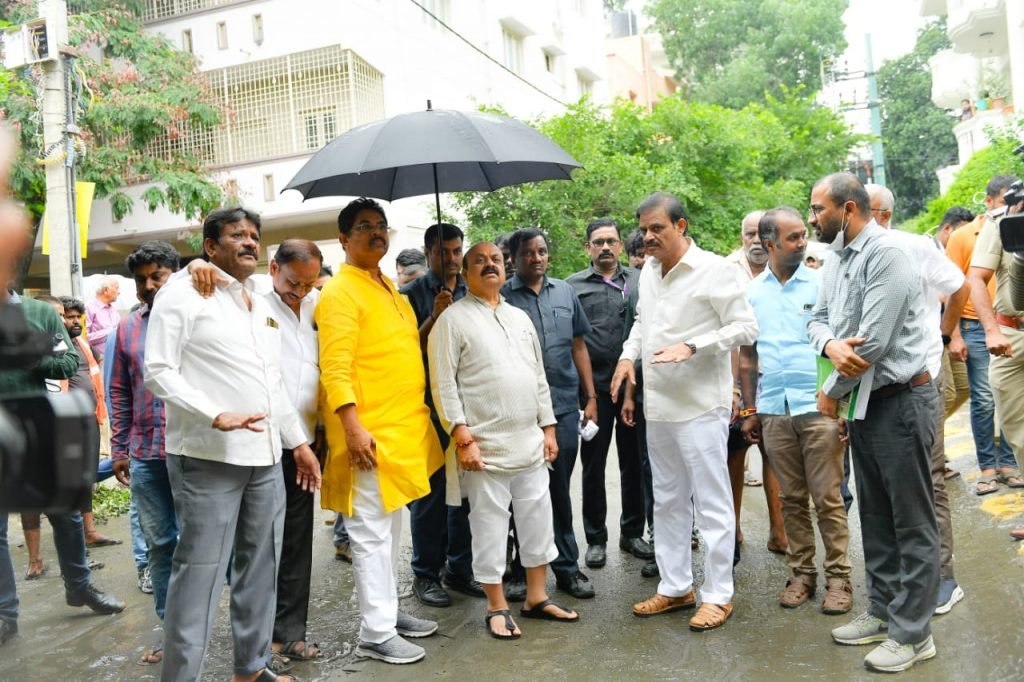 Dev Bharat and Ankit Kumar hailing from North India died due to heavy rainfall that lashed through the ast night. The rain has devastated the city and left a trail of destruction prompting the chief minister to inspect rain affected areas.

Expressing his grief at the death of two persons who lost their lives at Ullal where BWSSB works are in progress, chief minister Bommai said Rs 5 lakh solatium would be paid to their families.

Encroachments on Rajakaluves have been identified and action is being taken to clear them. Most of the inconvenience is being caused due to simultaneous works of underground drains, gas pipelines, telecom cables, water supply going on in the city. Roads have been dug up for these works. Therefore a Task Force is being constituted. Road works would be taken up after completion of these ongoing works, Bommai said.

The Chief Minister was interacting with media persons after visiting the rain ravaged areas of Hosakerehalli and Rajarajeshwari Nagar.

Low lying areas are flooded in Bengaluru during heavy rains as the water flows from high areas to low lying areas due to the topography of the city. In many places houses have been built along the Rajakaluves(major storm water drains. As a result water cannot flow smoothly. Action has been taken to drain out water from houses which have been flooded. The clogged Rajakaluves and waterlogging areas have been identified. Orders have been issued to take all possible measures to remove all bottlenecks for smooth flow of water in Rajakaluves and low lying areas, Bommai said.

Construction of secondary and tertiary drains

In many places rain water is gushing into the homes due to encroachments and construction of houses on lake beds. BBMP would build secondary and tertiary drains in such areas. These works would be completed within an year, Bommai said.