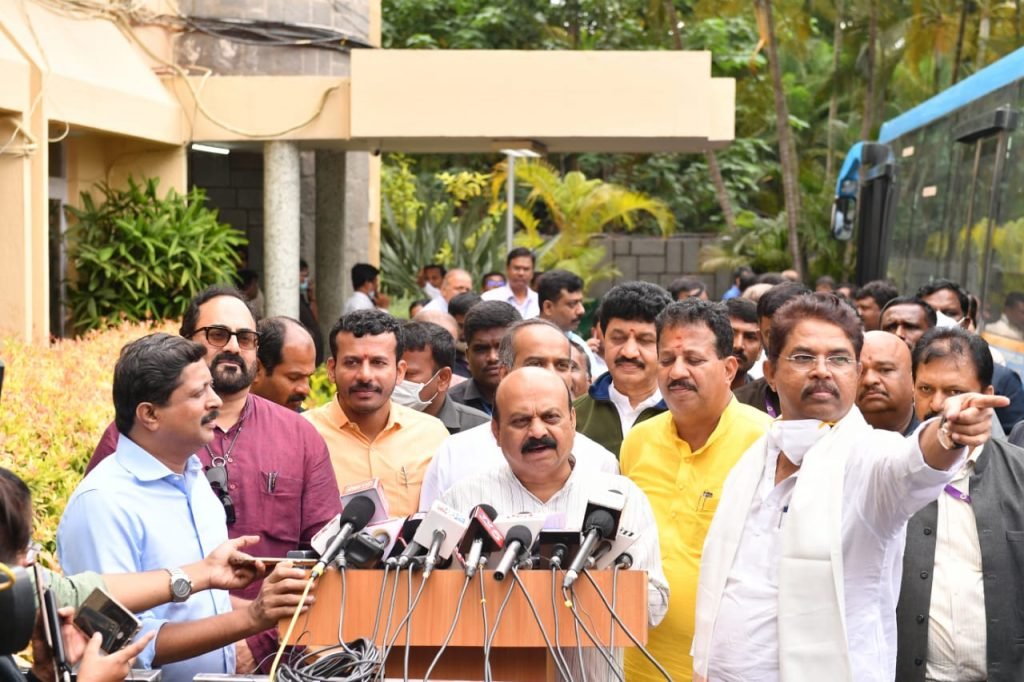 Bengaluru, May 19: Modernisation of storm water drains in an integrated way is being taken up at a cost of Rs1600 cr, Chief Minister Basavaraj Bommai said during an interaction with media persons after visiting the rain affected areas of Bengaluru on Thursday.

“We had made many decisions to address the flooding problem in the city when I held a meeting with MLAs of Bengaluru when it rained last time. A decision was taken to develop storm water drains (Rajakaluves). The DPR has been prepared and the plan has been included in the budget. Work orders would be issued soon. Bottlenecks and silt would be removed for smooth flow of water in these storm water drains, Rs400 cr is being spent for the purpose,” Bommai said.

The work has to be taken up in an integrated manner. For instance in HBR layout, accumulation of silt has clogged the drain for a length of about 2.50km. Orders have been issued to desilt. Secondary and tertiary drains would be constructed in wards along these stormwater drains or primary drains. State government would fund the works on Primary drains, while BBMP would foot the bill for secondary and tertiary drains. It has also been instructed to increase the capacity of the STP plant to 40 MLD, Bommai said.

Pointing to very heavy rains within a short time period as the main cause for flooding, Bommai said the average 15 day rainfall for the month of May was witnessed in just 4-5 hours in the city. It is one of the heaviest rains that the city has witnessed in the month of May in the last 40-50 years. Naturally all the low lying areas are flooded. This is happening over the last 3-4 decades in Bengaluru whenever it rains heavily. Though the relief works are on, the rapid growth of the city is making it a tough task to find a comprehensive solution, Bommai said.

Work is on to build a 100 MLD capacity STP and another STP with 60 MLD capacity has been approved at Hebbal. Desilting would be taken up in Mahalakshmi Layout ward for smooth flow of water, old bridges are proving to be bottlenecks in Vrishabhavathi valley. Measures are being taken to address all the issues to prevent flooding. In KR Puram ward the railway over bridge is causing water logging and action is being taken to solve the problem. Desilting and pumping out of water in inundated areas has been taken up on war footing with involvement of Home Guards, BBMP staff and Civil Defence personnel, Bommai said.

Referring to houses that have come up along the stormwater drains, Bommai said they would be cleared to enable smooth flow of water. A compensation of Rs25,000 has been announced for houses which were flooded. The amount would be transferred directly to the affected families through DBT, the BBMP has been instructed to provide them ration for a week and make arrangements fto serve food for them till water levels recede.

The DPR for the Rs1600 cr project to modernise Stormwater drains has been approved, survey, estimation, design and identification of bottlenecks is being carried out. Houses along the stormwater drains need to be removed. Water is overflowing even in a drain which is 300 feet wide as the it has rained heavily. Many of these drains were built long ago and their carrying capacity is proving inadequate for present needs. They need to be widened, the number of Sewage Treatment Plants would be increased, Bommai said.

New challenges would be tackled in a planned manner

Replying to a question about concern expressed by former Chief Minister SM Krishna on Brand Bengaluru, Bommai said, “we are aware of his concern. Bengaluru had seen good development during his tenure. But there is a huge difference between Bengaluru today and the city then. The city is growing at a rapid pace. The city has expanded in a big way with the inclusion of 110 villages into its domain. Works to provide drinking water and underground drainage systems to these villages is going on. We are tackling the new challenges in a planned manner.”

Clearing encroachments along Rajakaluves would be taken up on a war footing. Action would be taken to decentralise the administrative structure of the city, he said.