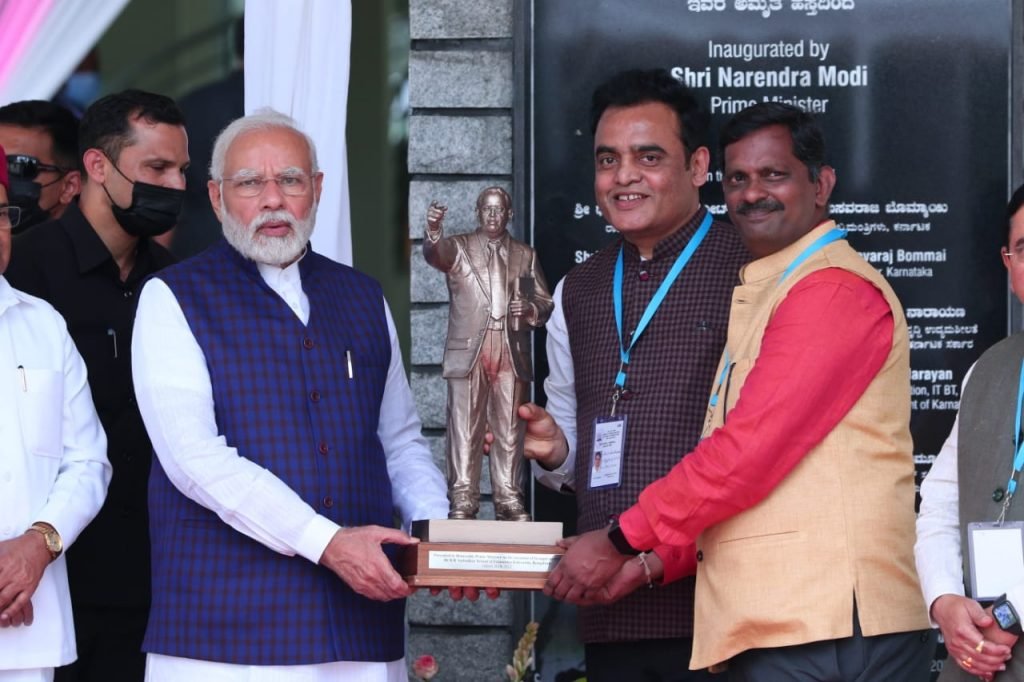 The event was devoid of any speech or announcement. But there was no dearth for the underlying excitement throughout the event.

On Prime Minister’s arrival at the BASE campus from Kommaghatta helipad, Dr C.N.Ashwath Narayan, Minister for Higher Education welcomed him. To begin with, Narendra Modi unveiled the 22 ft bronze statue of Dr B.R.Ambedkar installed on the campus. A feeling of rewarding the architect of the constitution and great economist was felt among those who were gathered to witness the momentous occasion.

After this, moving on to the Administrative Block of the ‘BASE’, PM dedicated the 13 blocks built at a cost of Rs. 250 crores. At this juncture, Minister Narayan presented a miniature model of Ambedkar to Prime Minister as a gift. Prime Minister was very happy to receive to this.

Immediately after this, he dedicated the 150 ITIs which have been upgraded in collaboration with Tata Group at a cost of 4.736 crores. As PM Modi launched this by clicking the button, all the 150 ITIs which were connected entered a new chapter in their growth trajectory.

Later he went to the students who were present there and spent a couple of minutes (5-6 minutes) with them asking about their educational progress. There were a few camera clicks and a photo session on the nearby steps. After this, he went to have a glimpse of the ITI model centre which was set up for the occasion. There he got apprised about ITI tools and equipment by the personnel who were deputed.
Finally, before leaving for Kommaghatta he was involved in another round of photo session on the steps of the campus.

Brain Study Centre launched at IISc
Earlier, Modi dedicated the Brain Study Centre established on the IISc campus at a cost of Rs 280 crores. The laying of the foundation stone for this centre was performed by PM Modi on Feb 18, 2015.