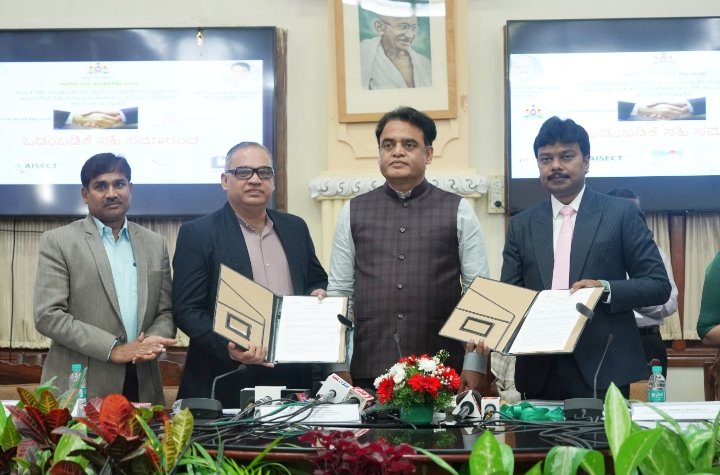 Bangalore, Dec. 1: The revised ‘Skill Connect’ portal was dedicated on Thursday by Dr CN Ashwath Narayan, Minister for Higher Education and Skill Developments. A total of 5 MoUs were also inked with five companies with an objective to generate employment.

To mark the occasion ‘Pledge Letters’ were unveiled by the Minister, which describes about the proposed reforms in the departments of Higher Education, IT/BT/S&T and Skill Development/Livelyhood

Speaking on the occasion, Narayan, said, revised ‘Skill Connect’ portal would facilitate both job seekers and employers by connecting eachother.

“Online digital learning courses will be introduced in universities. Accordingly, every University will have to have a minimum one degree course in online format before March 2023”, he stated

Universities have been instructed to get registered at Academic Bank of Credits before December 22. Besides, they need to enter into MoUs with minimum 5 industry partners in next 3 months, he pointed out.

Marks cards of ITI will be digitalised and uploaded to national education depository. A total of 60,000 ITI students will be provided with the best training by Microsoft, Narayan told.

English learning labs will be set up, arrangement will be made to teach Japanese language, installation of new software to facilitate financial transactions of self help groups, ID cards and will be handed over for street vendors, Narayan told. He added, Motivation camps will be conducted for 13,500 women entrepreneurs through CDok and job letters will be given to 10,000 job aspirants.