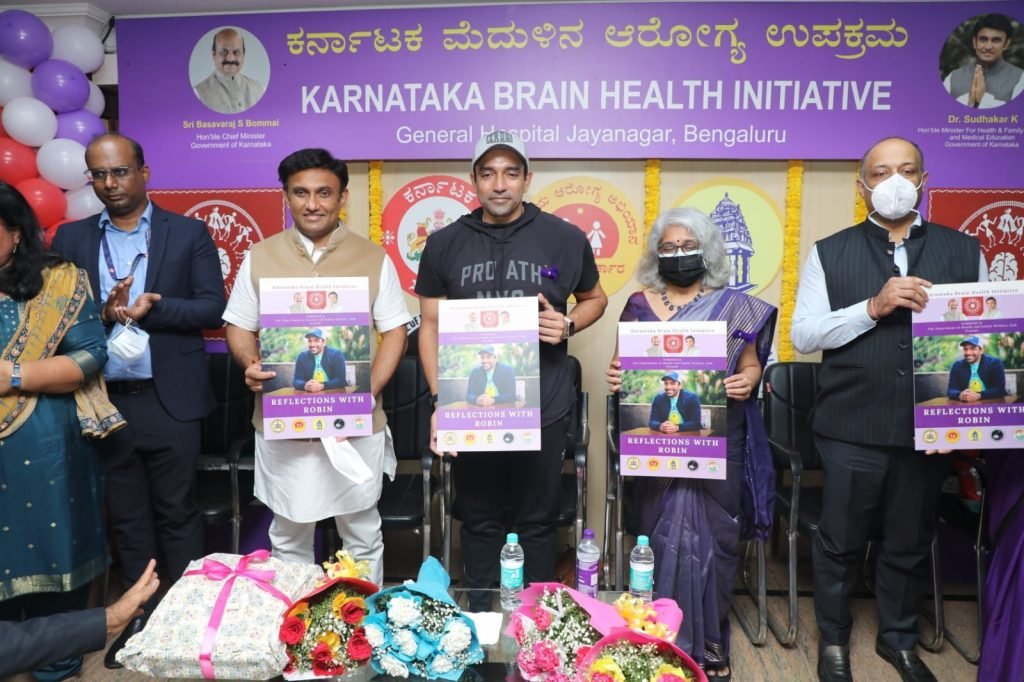 PHC docs to be trained to diagnose mental health issues such as Parkinson’s and Dementia: Health Minister K Sudhakar

Taboo and stigma surrounding mental health needs to be fought

Prior to inauguration, Minister Sudhakar spoke at World Brain Day-2022 event organized at NIMHANS and stated that treatment for mental health will be available at the 243 Namma Clinics and will be started soon in Bengaluru.

The main focus of the KaBHI initiative is to train PHC doctors to diagnose and provide primary care for brain and mental health issues including Stroke, Epilepsy, Parkinson’s, Brain Tumor and Dementia. Further, the initiative focusses on training ASHA workers to screen people for such mental health issues which greatly increases speed of diagnosis and treatment potentially offering a complete cure to some of these diseases.

The Brain Health Clinics will serve as nodal centres to diagnose, treat, refer and follow-up patients with common neurological disorders and ensure that they receive multidisciplinary care, including counselling, physiotherapy, rehabilitation and disability benefits.

KaBHI is the first of its kind initiative in India with the objective to promote brain health in the community from PHCs to secondary level district hospitals and NIMHANS at the tertiary level.

“Doctors working in most rural PHCs are MBBS doctors and lack skills and knowledge to diagnose Mental Health issues. With the help of NIMHANS, we have trained 100 such PHC doctors to make mental health treatment more accessible at primary and secondary levels. With this, people from far off places need not come all the way to NIMHANS unless there is need for tertiary care. This will also allow fast diagnosis which leads to better treatment which in turn can potentially lead to a complete cure,” said Minister Sudhakar during the inauguration event.

Minister Sudhakar also spoke about the taboo and stigma associated with mental health. “Many people have wrong opinions, taboos and stigma about Mental health. If one is seen going to a counselor or a psychiatrist, people think that there is something wrong with the person’s brain or that they are mad. Many don’t get go because of this,” he said. He further said that these reasons in addition to poverty and lack of adequate facilities cause mental health issues to go unaddressed. The KaBHI will also focus on making mental health more accessible while fighting out the stigma through awareness programs simultaneously.

The initiative was launched in January 2022 by Karnataka Chief Minister Basavaraj Bommai on a pilot basis for Chikkaballapur, Kolar and Bengaluru South districts and will soon be extended across the state.

Minister Sudhakar said that the personal trigger to increase access to mental health came to him when a person at Bengaluru’s Victoria hospital died by suicide after testing positive for COVID-19 when the pandemic initially struck India. Minister Sudhakar recalled that this is when he realized that counseling was necessary for COVID-19 patients and started a door to door counseling in collaboration with NIMHANS. He stated that in around one and a half years since the counseling began, Karnataka had counselled 25 lakh COVID-19 patients, which was done in no other state in the country.

Famous Indian cricketer Robin Uttappa, who is also a Kanandiga, has been made the ambassador for the initiative and Minister Sudhakar appreciated him during the event for readily agreeing to be the ambassador without expecting for any remuneration.