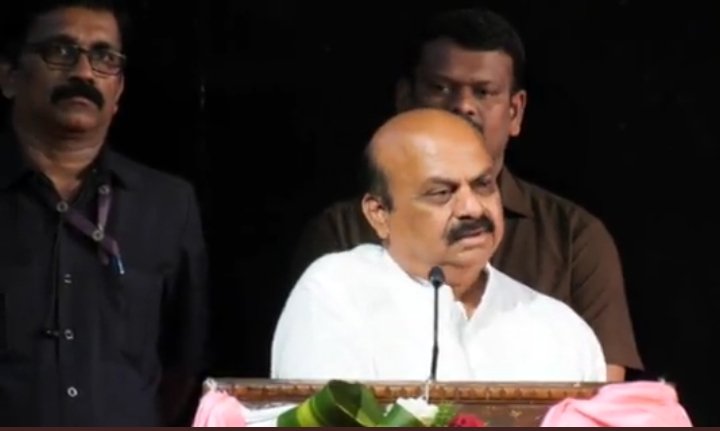 Chitradurga (Challakere), Nov.22: The Congress Party is dreaming of returning to power in the State, said Chief Minister Basavaraj Bommai.

Speaking at BJP’s Jan Sankalp Yatra in Challakere on Tuesday, he said Leader of the Opposition in State Legislative Assembly Siddaramaiah asked people to vote for the Congress Party if they wanted him to become the CM. In the confusion between Siddaramaiah and KPCC President D.K.Shivakumar the Congress Party has sunk completely. It has sunk in all the states and it will meet the same fate in Karnataka in 2023 also.

Congress Padayatra in Karnataka is a big flop
The CM said former AICC President Rahul Gandhi did Bharat Jodo yatra in Karnataka and people from Shivamogga and Thirthahalli came and assembled in Challakere. Rahul’s was half padayatra and half car ride and such pada yatra will not have any bearing on Karnataka.
The Congress Padayatra has failed completely. The Congress leaders are scared of Jan Sankalp Yatra because of which they are making allegations against the ruling BJP government to tarnish its image. The Congress means corruption, corruption means Congress. If they come back to power, what they will do is corruption. The Congress Party must be totally eliminated from the State.

“During the Congress regime, injustice was done to all the communities. They tried to divide the Veerashaivas-Lingayats, and to create backward classes by identifying sub-castes among backward people. The Congress tried to make use of this by creating division among the castes in the elections but the electorate rejected that party completely.

To develop Challakere
Bommai said the government is committed to bring back the glory of Challakere and special grants will be given for the oil business. With the blessings of Prime Minister Narendra Modi, Challakere will emerge as an important city in the country. The ISRO unit at Challakere will become the sixth satellite landing centre in the whole world. Works have started with the financial assistance from the union government. One more national highway is coming to Challekere and for the execution of this project the region needs to have BJP legislators who will work for the people. In 2018, the people were ready to vote for BJP but they missed the opportunity by making a mistake. This time, all efforts will be made to win this seat.